Visiting Warsaw was never high on my bucket list. Before jumping on the plane, I didn’t research Poland and all I knew about the city is that it saw terrible events of WW2. So, I imagined it to be a depressing city without much character. I didn’t even look at a single travel book about Warsaw (because there actually isn’t one). There’s a part  of me that loves the feeling of travelling to a place that you have no previous impressions of!

My mum, sister and I decided to have a girly weekend away and our decision to go to Warsaw was based purely on the cost as the flights and accommodation was dirt cheap.

Warsaw is the Polish capital and it’s unfortunate location has meant that it’s struggled a lot through the past centuries. For a traveller, Warsaw’s turbulent history, beautiful architecture,  abundance of green spaces, cheap eateries and quirky bars are a massive draw.

It’s further off the beaten track and Karkow appears to be the tourist hotspot of Poland, but Warsaw’s got a more local and authentic feel to it, don’t waste another second overlooking it. 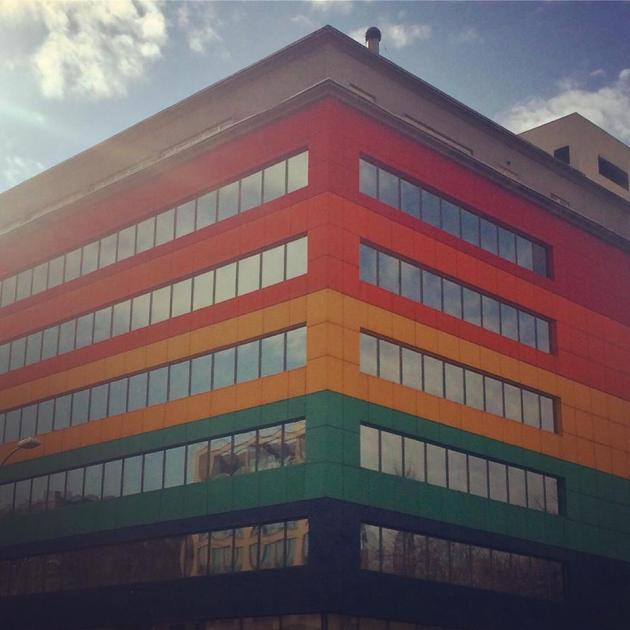 Stay in Praga, which is located in the east of Warsaw just over the Vistula River. It’s an incredible district which is overflowing with studios and galleries, and many hidden underground clubs and bars. Much of the post-industrial buildings in Praga survived the war and it’s here where you can find some beautiful pre-war streets and apartment blocks.

We stayed in a two bed apartment that we booked on AirBnB – it was incredibly spacious and it was complete with exposed brick walls and high ceilings. It was also next to this fab cafe, Halas, which just sold coffee, vinyls and banana bread.

What to do whilst you’re there

One of the most remarkable things in Warsaw’s skyline is the Palace of Culture and Science, dubbed as ‘Stalin’s Penis’. It’s aggressive but is a beautiful piece of Soviet architecture. If you fancy it, you can take a lift up to the 30th  floor for a 360 view of the city.

The Old Town of Warsaw has literally risen from the ashes and to say that it was hit badly by WW2 would be an understatement. It was completely flattened during the uprising and only two building survived! The buildings here are beautiful and it’s hard to believe that they aren’t the originals. Craft beer is something the Poles know how to do well, so after you’ve wandered around the old town, put your feet up and have a pint at Same Krafty.

If you’re not staying in Praga seriously consider taking the tram and a day to explore this district. Make sure you head to the SoHo Factory as it’s where designer shops and incredible restaurants are located (but more on the food later), alongside the Neon Museum. It’s an overwhelming experience of colours and shapes which date back to the Soviet time and are collected from all over Poland.

Another incredible museum to visit is the Warsaw Uprising Museum, which is a modern and interactive look into the story which shaped the city forever. It’s heartbreaking and expect to walk around the building with goosebumps and tears in your eyes.

You can’t head to Warsaw without trying some Polish food so trying pierogi’s at Goscciniec is a must. It’s a small restaurant located in the Old Town and their traditional food is fresh, hot and delicious. We had piergois with spinach and cheese, and potato dumplings stuffed with pork.

Wandering around Warsaw we found a lot of Italian restaurants or places serving up Italian inspired dishes. If you’re in the eastern part of the city head to Pausa Włoska and make sure you save enough room for dessert because you don’t want to miss out on their tiramisu.

And if you find yourself in the western part of Warsaw, then hit up BYC Moze. Locals love it because you can get your hands on fresh bread, buns and cakes. We loved it for their creamy risotto and breaded turkey with the smoothest mash. It’s complete with communal tables and floor-to-ceiling windows. The perfect place to take a pit shop, rest your feet and people watch whilst you bathe in the light that comes streaming through the windows.

On our last day we headed the SoHo Factory where we stumbled into Warszawa Wschodnia for brunch. It’s open 24 hours a day, seven days a week, and if you’re lucky you can sit around the open kitchen and watch the chefs cook your food in front of you. I had the best eggs benedict that I’ve ever had here. It was so rich and creamy, plus it only cost £3!

We were incredibly lucky with the weather when we went in March. We were told by many people that it would be freezing but we actually didn’t need all our thick, woolly layers. To get the best out of the Polish weather, visit in the summer.

How much does it cost?

I can’t get over how cheap Warsaw is! When we went the exchange rate was 5 Polish Zloty to every pound. A pint of craft beer costs around £1 and we were constantly dining out. We have so many 3 course dinners, bottle(s) of wine, cocktails and even some shots of vodka and the most we ever spent on dinner was £30 a head.